Hi. Can anyone advise please. I have had my system for 4 months and now all of a sudden the camera is fogging up at night. When I put the spotlight on it clears. Then when i switch the light off it again goes foggy. During the day it’s a great picture. I have cleaned the lens several times. I also have an identical camera in the garden and that is fine. I’m wondering if the infrared is or about to fail. Any ideas please.

Welcome to my life in the Pacific Northwest. It’s normal and you answered your own question… spotlight

On my non-lit cams I shut off IR and use motion lights.

I appreciate that but for the last 3 months it’s been fine at night. I’ll swap my cameras around tomorrow and see if the other camera does it (in case where it’s situated is causing it) then if not I know it’s a potential fault.

I like your testing but Every night is different. I have spots where my cams are located that are hotspots for this. My 2c cams have ended up in those spots because the tiny light actually gives me something … otherwise that spot would be grey. I much prefer IR night vision… but fog/rain drops on the face of the cam will give me garbage. I have 6 cameras outside… trust me it happens to all of them especially this time a year for me. And some nights only one cam is trash and the rest are clear. The joys of weather. Let us know your test results

Also keep in mind what your IR cams see is completely different from what your eyes see. That’s why the spotlight and motion lights (with infrared off) in my case will clear things up for the camera.

Read some where else people have used rain x for plastic and another use car wax to help stop fogging and rain droplets.

Any one tried in this forum?

Update. Contacted eufy via email and showed them pictures of spotlight on. Infrared on and all off. They agreed with me that the infrared is faulty and as a result I am getting a replacement under warranty. Now that’s good customer service.

Really? Interesting. Did you swap the cams as you had planned?

Lol how is the infrared faulty? It’s on or off. If the cap of the camera (the side where the lense is at) is foggy, the IR bounces off and causes this problem. Someone else had the same thing because he did not remove the protective filter.

If your replacement has no fog issues, then that must mean that the temperature inside of the device is different. It can’t be the IR., that doesn’t attract the fog /moist as it’s off most of the time.

I have had the fogged up thing happen to me too. The first time I cleared the lense and the problem was gone. After that I didn’t bother because it’s the weather and I CBA to wipe it every time.

Definitely the weather can play a big factor, especially with moisture. I have several cameras that have been doing this recently because of the change in temps.

Where they’re located plays a big factor as well. I have some under a roof, no issues. Some 30 feet away that are completely exposed to the elements…fogged up throughout the night. There’s plenty of factors, it doesn’t mean my IR doesn’t work, it’s just science. I would have tried the test FIRST and troubleshooted the situation. Especially because you didn’t have issues before. And just because Eufy is sending you out another device does not mean it will solve the problem if it’s environmental.

Plus another fun tidbit, lol. Eufy will replace almost anything with a little push. They wanted to replace my 2K doorbell camera and I was complaining about their app update, LOL!! It’s great at times knowing they’ll just replace their products, but it won’t matter if it doesn’t change the result. However, with all that said…hopefully the new camera will fix your issue.

When i say foggy thats just my way of describing the picture clarity. there was definitely no fog out at the time and the lens was clean with no moisture on it. I agree with the temp fluctuations having an effect but i tried several things before contacting them. When the IR was completely switched off the picture quality was good (There was some minor background light from another source) when i used the internal light again i had a crystal clear picture. The moment i switched the IR lamp on the picture would go completely white. The camera had been in situ for 3 months with no problems at all, then i noticed this whiteout occurring and hence the issue.

I appreciate everyone’s feedback, thank you guys. Forums like this are where the real knowledge comes from

@tdavies1969 Good to know the additional information. Which camera do you own? In my experience with the Cam2 and Cam2 Pro, the inferred lights are meant to project at a good amount of distance (could be up to 30-40 feet). When there is moisture on the front of the camera, it seems like the IR lights are unable to do this and instead they light up, what seems to be inches, causing a very bright, unable to see video. It also exposes that foggy look because it seems to bounce of the moisture on the lens. I hope I’m making sense here, lol. Unfortunately, I can only speak about the Cam2 and Cam2 Pro in my situation.

Below are a couple of examples where you can see the difference (with some moisture). I have others where it rained, and I’m guessing the front of the camera was soaked and the videos were pretty much useless. Hope this helps. 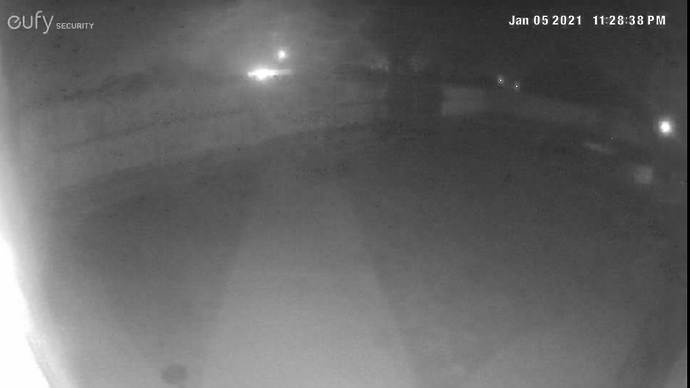 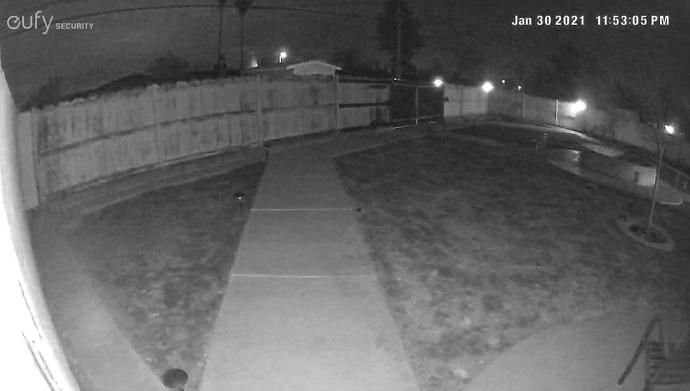 definitely no fog out at the time

IR will light up moisture your eyes can’t see. 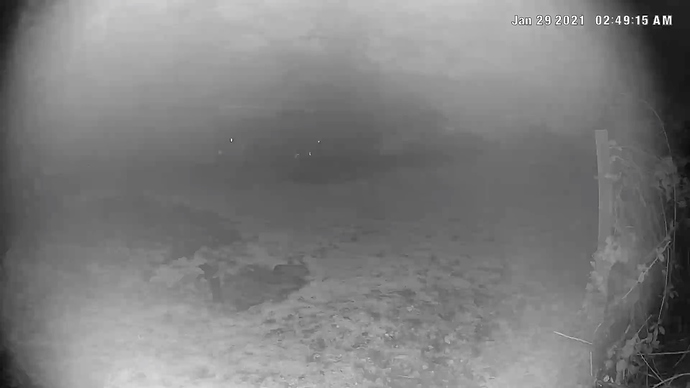 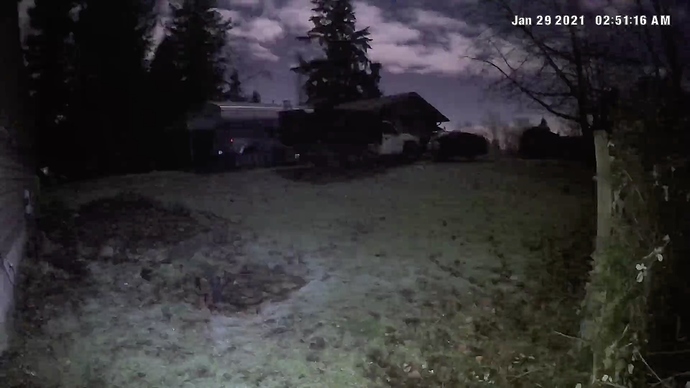 Some nights look like a snowstorm or a bug swarm. Step outside… clear. Video is cool but it won’t upload. Screen shot. 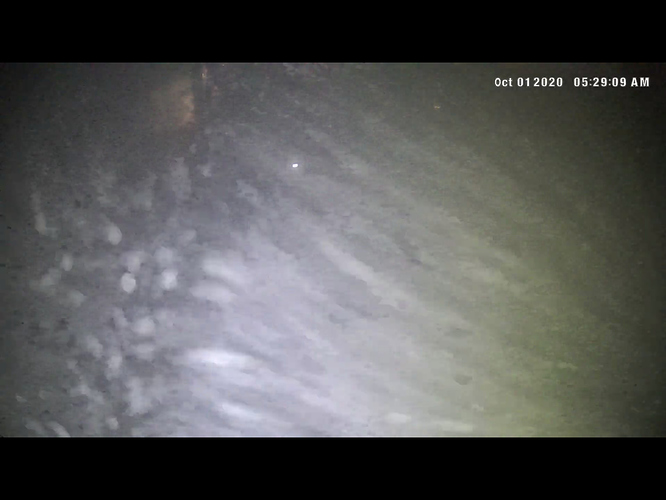 If your new camera does this… pull it down and bring it inside immediately . Shut off the lights and BOOM … clear and bright. I check my cams every night before I go to bed. Foggy look? Spotlight on the 2c… IR off on the 2k pros ( with backing motion lights (or 2 on one cam )) this makes for usable videos.

On nights where it is ACTUALLY foggy out ( to my eyes ). There is absolutely NO fixing it.

Good to know the additional information. Which camera do you own?

I tired rain x for the water droplets that were staying on the lens when it rained heavy, does not help at all for that unfortunately

Bummer. I picked up cases with a little rain hood (2c). On a perfectly still nite they appear to help a bit. Will take what I can get. Still looking for cam2 rain/sun visors. (Tried to DIY it… fail). The little drops that sit on the top or lens will blind the cam with IR on. 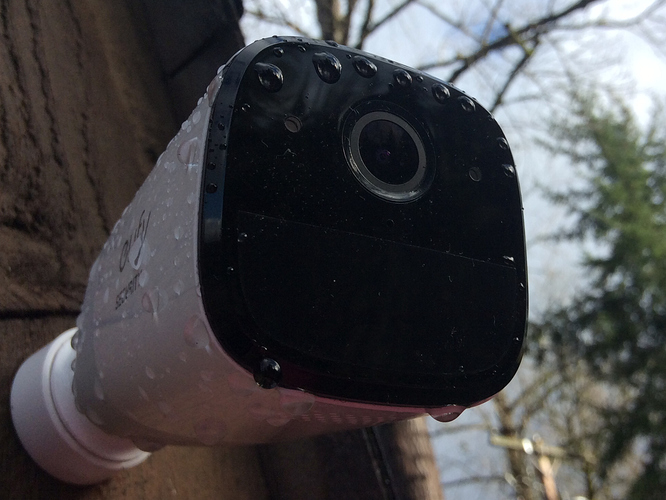 Think the rain-x would get the drops off the cam face?

I have a little hood over my 2c also, but unfortunately in Ireland we get heavy rain coming from all angles, but still hood helps 50 percent though when weather not crazy, it should definitely help it I’d imagine, I done the same to mine with the rain x , but the lens was my mine issue