Easy to steal. Eufy is a toy company not a security company

These cameras are very easy to steal. I have learned from experience. Someone targeted my eufycam2, unscrewed it and ran away. The anti-theft only got triggered after the whole camera was unscrewed. No motion was detected and therefore no video recording either. This was one camera that was set on high sensitivity. From the very beginning I have had very poor experience with this product. Eufy is a toy not a dependable security product.

Nevertheless, most camera’s can easily be stolen if it’s within reach.

That’s a weak argument for a security product. Then why does the product incorporate an anti-theft feature? Is that just for marketing? Imagine the difference the following would make:

Stop making excuses. Examine if your “security” products are dependable.

The real questions are:

Ultimately, if anyone goes up to a Eufy camera, blink camera or ring camera it’s going to be an easy steal if you unscrew the threads. You’re 100% better off having a hard wired camera system. Eufy can’t make it too difficult to take them down because you need to charge them up every 6-12 months.

The Eufy forum isn’t a place to moan about your bad experiences. Talk to customer services. I’ve struggled with this system in patches over the last 18 months. Sometimes you’ve got to use the tools you’re given to over come your problems. Eufy can’t click their fingers and sort you out mate.

What a load of rubbish on your review I have had it eufy over yeah works perfectly fine. you must have rubbish Internet, eufy security is amazing in fact this company is gonna do really well I think it one of the best

Well of course this camera is easy to take, so what, it works great. I have 6 cameras, and been using them for over 2yrs.

What is the point of a security product with so many flaws? You have compared these cameras with cars which has many mechanical parts but not sure if you know, ultramodern electronic vehicles do have immobilisers. Eufy cameras are an internet connected electronic device that can easily disable itself if taken off-range from current Homebase.

Agreed, that people looking to steal will, heck even bank vaults are broken into. That does not mean security can be lax! I have a few points for consideration:

Finally, this is a review of the product. People buying should realise the flaws before investing into this product. If this product was good, I would at least have had some footage of the thief running away with the camera. And my neighbours would have woken up hearing the camera alarm. Thank you. Hope I have answered your question.

Thank you for your review, we really appreciate your opinion.

Like to say one thing on this product. You need to make the camera harder to steal. I have two cameras and can easily reach them to unscrew. Even if the camera identifies the thief, you really think the police are going to drop everything to catch this crim? Don’t think so! You’ll just have to go out and buy another one. Make then harder to steal! It’s 2022 not 1972! It can be that hard, surely?

eufy and all the other ip camera companies are caught between making the cameras easily removed for charging or making them a pain in the azz. if it was hard to remove this forum would have a bunch of people complaining about that. if you can’t mount them high enough to require a ladder, go buy some security screws for your mounts and locktite (red permanent) the crap out of the camera threads.

Making it harder to steal won’t rack up complaints as it’s a twice or thrice a year activity. Anyone purchasing a security device understands the need for making extraction difficult. When you buy a steel safe do you look at how easy it is for you to open it or how tough it is for a potential thief to open it?

Besides as I mentioned, there are subtle things that Eufy can do.

It’s appaling that you are justifying a poor design.

nobody is saying they can’t make improvements. i also believe that if eufy won’t replace stolen cameras they need to help track down stolen cameras and make them useless once reported. most people understood the limitations of this system before purchase. the sync button issue and the ability to delete events is the only real problem with this system. that means that if you can’t mount the cameras out of easy reach find another system.

Find another system? Yeah that’s the point.
You talk as if the buyer should have studied the Eufy bible from all the nooks and corners of the internet before buying! It’s not like Eufy mentioned their shortcomings in their marketing material. So here I am, doing Eufy a favour by providing them genuine feedback that are easy to implement so that they can release a sturdier product. Along the way, I’ll help all the others “find another system”!

you talk like eufy is the only ip camera with problems. i have both arlo and eufy and both have problems. I’ll give you credit in that you just did not post eufy sucks without being specific. my arlo cameras are no better at providing camera theft protection then my eufy cameras. at a certain point you have to understand that eufy is not going to fix the shortcomings in their products. in 2 years i have seen hundreds of good recommendations posted here that would improve their products, i have yet to see 1 implemented. that being the case , fix the problem with securing the cameras and start a thread showing us how you did it. that’s constructive , threads like this are not.

load of rubbish on your review

He didn’t say it works “ perfectly fine” He was talking about camera theft. Eufy is weak on this. One button push will erase all footage. And cam lockout after theft is not as it should be.

10 ft? Where did you get that nonsense? And what does activity zones have to do with camera theft?

we really appreciate your opinion

The higher the camera the harder it would be to steal? 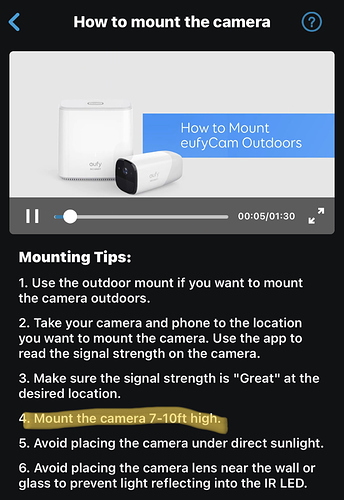 Of course, everyone has an opinion, it doesn’t mean we all have to agree. It’s nice to have a discussion on here.

Oh and the activity zones don’t have anything to do with the cameras theft. I was linking it to the fact the cameras didn’t catch the thief on video in the first place.

If the thief somehow walked where the activity zones were not active, the cameras would have had no chance of catching them in the first place.