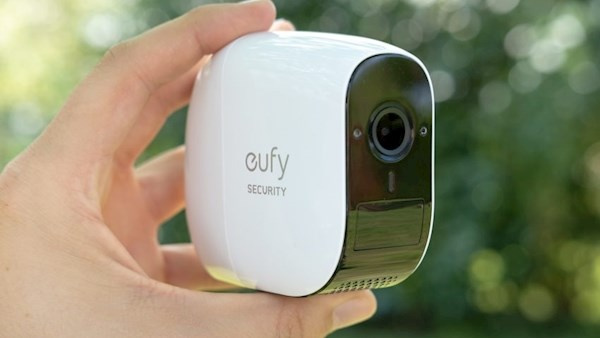 Home security can be very off-putting for many of us due to complex wiring that requires professional installers and/or expensive systems. Thankfully, there are bespoke options out there that can keep you safe and provide visibility on your property. I’ve been testing a smart camera system called the EufyCam E for the last few months and although this isn’t a complete security solution, for many, it offers more than enough for some peace of mind.

The EufyCam E comes with two separate cameras, a base station and two styles of mounting brackets. If two cameras aren’t enough, you can add up to 14 more for a total of 16 and thanks to an IP65 waterproof rating, you can mount them pretty much anywhere you like. Two key selling features of this system I particularly love is that it’s completely wireless and the battery in each camera only needs a full charge once a year.

Unlike a lot of other systems, you’re not tied down to monthly subscriptions services either. However, Eufy does offer a cloud subscription as well. Instead, the base station, which connects directly via ethernet cable to your modem/router contains a microSD card slot for onsite storage. It even comes with a 16GB microSD card in the slot, ready to go which is a nice touch. After three months of use, the 16GB card was only 15% full. You can even configure the base station to record directly to network-attached storage (NAS) via RTSP (The Real Time Streaming Protocol) if you have a compatible NAS drive.

The two different mounting options are for different scenarios. One installs with a couple of screws and has a ball. The camera mounts to the ball magnetically and can be adjusted with a wide range of angles. This is ideal for indoor installations. In theory, you could have several of these mounting plates in different locations and then move the camera from place to place as required.

The other option is also a simple two screw installation but instead of a magnetic connection, it has a threaded bolt which the camera screws onto. Clearly, this is intended for exterior installations. I tested both mounts with great success. The kit comes with the screws, which are stainless steel so no worries about rust as well as the wall plugs.

To get started you first have to install the free software to either an Android or iOS device. Once that’s done, the setup is really straightforward, as it walks you through setting up the base stations and cameras and making them available on your home WiFi.

The EufySecurity app allows you to configure the base station and cameras as well as do firmware updates. The app provides live-streaming, push notifications when it detects movement, and you also get integrated compatibility with Amazon Alexa, Google Assistant and IFTTT (if this, then that). Although both AI assisted features are still in beta, I didn’t have too many

issues using either. With Alexa, I was able to ask her to show me the streams from either camera on my Echo Show. With my Google Home or Android phone, I could ask Google to show camera streams on my TV using a Chromecast Ultra.

The EufySecurity allows you to save video clips to your mobile device or configure the detection sensitivity, as well as create zoned detection areas. You can only create a single zone on Android for now, while on iOS, you can create up to three separate zones. The detection system worked flawlessly during my time of testing, but it does lack features like being able to detect people rather than just something moving in front of the camera. That being said, I have found such systems less reliable and would rather just use zones.

you also get integrated compatibility with Amazon Alexa, Google Assistant and IFTTT (if this, then that)

@Mengdi, I cannot figure out how to use IFTTT. Please help!

Do Eufy cameras or sensors support to IFTTT?

No. Since the IFTTT platform switched to a subscription model in Sept. last year its not likely that Eufy will support it in the future. Just my 2 cents. I don’t speak for the company, but it seems they have too much on their plate already to support another integration point.