I read something last year that this app was being developed for Windows 10, wondering how far along it is?..I would really like it for my home computer.

You can use BlueStacks and download the Android app. It works flawlessly.

Does anyone know the release date for the Windows app though?

@jonnybravo Thanks. I saw that thread but there is nothing to be found in the Windows store app. I have been a big advocate of Eufy Cams. However, this is quite frustrating/embarrassing when I am literally getting others to buy their product and they don’t follow through on one of the biggest things promised. I also really NEED the feature with (9) Eufy cameras!

Blue stacks works- so does my phone app but a native Windows app is the real solution.

The web version is frankly terrible. If it had the same or even some functionality as their app then a Windows app would be a moot point. The ironic part is the number of people who use Mac vs Windows is not even close. I have no idea why they released a Mac version first (still love the Mac). Happy they did but doesn’t seem to make sense. Will they release a Blackberry or TV app before Windows also (hopefully kidding!?) Looking at you Eufy to release the Windows version asap!

@jonnybravo How much better is their 2k vs regular Cam 2? I just asked you this in this thread: Eufy 2 Pro Question?

In my opinion I never used the Eufy 2. I’ve only used the Eufy 2Pro and 2k battery powered doorbell. But also understand my setup. I have my cable modem and Apple extreme (6th gen) plugged into battery backups.

So if my power goes out or someone try’s to turn it off wherever I’m still seeing and getting a feed. This includes my homebase 2 is plugged into another one at a different location. I use a total of 4 Apple Airport extremes for my own reasons but acts like a mesh network. Some are plugged into 2 are plugged into battery backups. This ensures nothing is missed if the cameras function like they are suppose to unless 1. They overheat. 2. The pushed firmware updates occur and something happens in screwed.

I’ve tried other Wi-Fi routers and although wifi6 is fast and incredible I had experienced many issues with the netgear product I tried. So I reverted back to what has been reliable for me and able to monitor issues far easier natively using IOS. I got airports extremes used of 4 at $50 bucks a pop which essentially is a steal. I had some older ones and just sold them off for the swap outs. Win win for me and whomever bought them. So that gives you the background of how I have these setup. 2 upstairs and 2 downstairs. I have over 30 items that use my Wi-Fi.

As for the video it’s not bad at all and very clear. But they do use compression techniques and such. The issues are still prevalent to the software and app. It deeply needs 2FA. I sent back my first doorbell purchased with Amazon because the doorbell wired didn’t function properly. I legit took the thing apart and multimeter everything to check my power was coming fro the transformer, wires, etc. But found the doorbell failed. So I sent it back. I bought a bundle deal at BestBuy.

Best Buy deal was a doorbell (battery 2k, eufy 2 Pro and homebase 2) for $325.10 including tax. Far cheaper than pricing this together. So yeah the image is good. But the sensor locations use cheap plastic similar to the Nest Thermostat, which can scratch easily. The cameras image for right now is one of the best on the market for a wireless system. But the other areas of this camera and doorbell are needing the desperate work. An recently I saw a post on someone saying their 2Pro camera had water leak into the casing. With a 1 month turn around on a replacement. The only down fall to BB is you have 14 days unless your a higher tier rewards member. Amazon it’s 30 days. I’m stuck and if I could would just send it back. But since I can’t I’m just riding the wave of fixes to come.

Typing from a cellphone and sorry for the typos if any.

@JonnyBravo Fortunately, at least I recently received the 2FA feature update (wooohoo!). That is a big start. Now I am long awaiting the Windows App promised in late 2019?! lol.

I have to say you have one heck of a great setup! I will be curious to how battery life is on the Pro is long term but it simply sounds like a better camera than my (5) “regular” 2s. That said I’ve had mine since March and have only recharged 2 of 5 simply due to usage (good enough). P.s. I also have 4 pan/tilt 2k indoor cameras. Since I got them on the preorder price they are pretty good so far.

I run massive battery backups for my router/cable modem. Where I live though we haven’t lost power in 8 years and counting (apparently I am the exception to most). So, the one huge downside is IF the internet goes down (still very rare for me) OR more often Eufy’s servers go down (face smash emoji!!!). I wish there was the capability if you are connected to your local network for it to bypass their servers. I get the reasons why they still do this and many companies do. However, with most of us home these days they could save a ton on servers and their server outages would not enrage the user base. Plus, hopefully put some of that savings into improving features (nudge nudge hint hint Eufy)

@Haadsecure @Yanyee1 Yea, so when is the Windows app actually arriving? At this point I want it so bad I’ll setup a donation jar for the Eufy coder that ports it to Windows just to have the feature that Mac has had for awhile.

Any other 1 billion+ Windows users out there looking for the Windows app?

Hi, this part of the windows app is already in the development process, Believe that will meet with you soon. Thanks for your support.

@Winn10 I know right they actually kept there word August 2020. Kudos @Yanyee1. Yeah well there’s the intermittent power outages or surges that rarely occur but it’s just a In place protective measure to not be a I could of done that moment. Besides the cost to replace the internal battery is cheap compared to buying a new one for the battery back up.

I just wish Apple would have continued to make Wi-Fi routers. To me and for me they just worked and very well PC wise or Mac wise.

As for the your win10 app see abovencomment above this one. Looks to be soon.

Here is another vote for the Windows native app, please.
I’d like to be able to see a video on one of my three monitors while I’m here at my desk working.

Do we have to open a ticket with Support on this?

It’s NOVEMBER and the last comment from 28-Aug says, “Looks to be soon”.

Hi!
I would also like to have a Windows app, any news about that?
I’d like the Windows app to be able to download all the video clips to my computer, all in one batch per day and not one by one.

I am still waiting… sigh!

Is windows ever coming out? 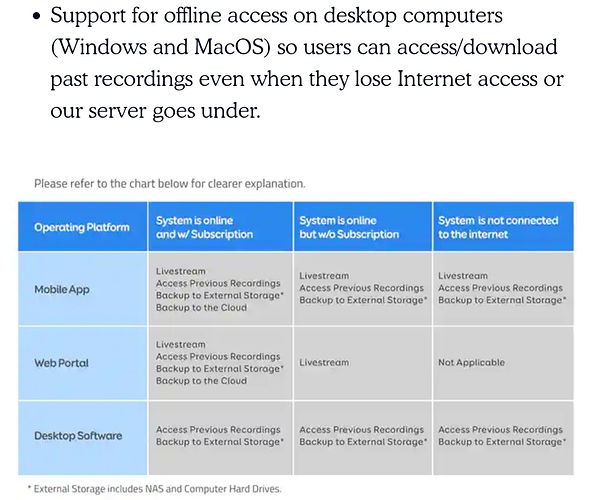 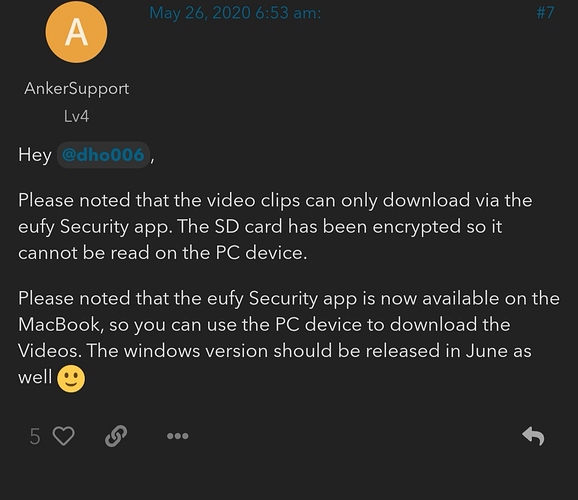 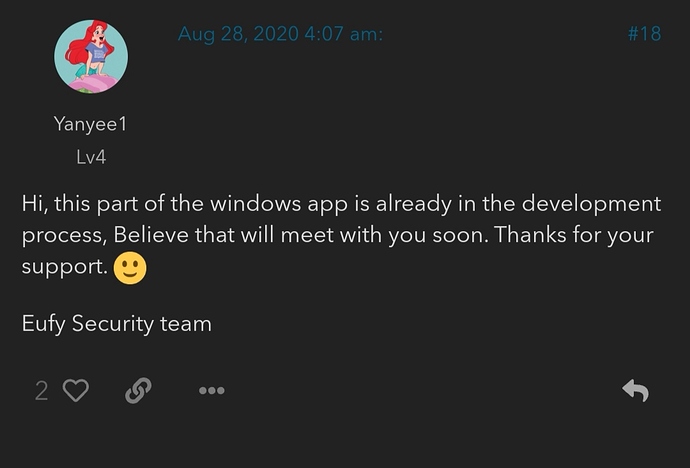 You say it’s going to be released in the following month which means it must of been completed just being tested, why no release a year later?

Just more vaporware from Eufy. Personally, I don’t think any dedicated codebase has even been started for windows. And trying to use an app emulator to run an Android app on windows is NOT an acceptable solution for windows as the video of the doorbell doesn’t work in the emulator. And a web solution is NOT a solution either when it doesn’t see any devices at all. In my case, I needed a camera for the front door. Ok, buy the doorbell and I now have a doorbell that I can answer remotely and I have the camera I need. No other devices needed. Try to monitor on the web and I login, NO DEVICES!!! The doorbell is the bastard child that just doesn’t fit in the security model when it comes to the software. So no windows sorry, and no acceptable workaround. No problem, you made this sale on vaporware, no need for anything more. Just keep making new promises and more money off those promises. After the latest security issue, you really need to get all old promises in order to be able to build some of that lost trust. Our definitions of “soon” don’t come close to each other.

What happened to the Windows app? This is ridiculous.

Wondering as well, have you sent an email to Eufy? @Winn10