Seriously, just got the system about 2 weeks ago. Works brilliantly. Just one wish… Doorbell in HomeKit

Lost my keys to the garden shed while putting the Christmas lights up.

I looked everywhere for them for 2 days because that’s where I keep all my tools for work.

I originally thought I’d lost them in the house but after watching back the Cam2’s footage I found that I had left them on the wall and the next door neighbour’s cat had knocked them off into a plant pot.

My neighbour was so jealous about my new eufy system (4 cams inclusing doorbell) that every once in a while he stopped at my front door and did some crazy stuff in front if my doorbell camera. Always a funny surprise when l‘m going through the recordings of the previous day/night. He finally got his anxious wife her own eufy video doorbell because she always begged him for a solution, not knowing who was on the door ringing the bell while he was off to work during the dark time of the year. She is happy now. And he suddenly stopped making funny things in front of my door. This is him and his brother a few weeks ago.

As @Ice4 stated that it will be good to see some nice ones. I will say with working due to Covid, I am almost home a majority of the time. Also I am in the country and there is limited crime where I live at. The most I get from my pan and tilt camera is that I set it in the window to catch and tell me if somebody is coming down my driveway (such as UPS). I will say the camera has fell twice off the window sill due to dogs and it still worked pretty well.

Good luck to you guys

Well, my story was shared here : Feedback After someone visited my garden

And I have to say the major issue I found (no detection of recording while live viewing) hasn’t been resolved. Adding a pop up or a message on the live view to warn users ,would already be a huge improvement.

Last year, I had a falling out with a friend who was staying with me while they were changing jobs. They decided to move out and had some friends help them pack up all of their stuff. Since things had gotten heated, I didn’t want to be at my house while they were doing this.

It turns out that they had decided to take a few “extra” items since they were there without me. Luckily, I had installed a Eufy doorbell a few months earlier. While going back over recordings, I saw that one of them had noticed the LED that automatically turns on when motion is detected.

I can only guess they didn’t know about the fact that the doorbell also records audio. They pulled another person aside and (wrongly) explained that the light meant I was watching them live, used a few explitives to describe this perceived action, but then proceeded to return the items that weren’t theirs to take.

Having the Eufy Doorbell ended up saving me a ton of uncomfortable conversations and even some potential legal intervention!

I’ve had my cameras set up for around a year and they catch all the usual comings and goings. A few days ago I woke to find clips of an attempted break-in at my property. I went to the police and thanks to my cams I had a crystal clear image of the offender and she was quickly identified by the police. If it’s wasn’t for the cams I would never have known of the attempt. This has since prompted me to buy a couple entry sensors as well for added security. http://imgur.com/gallery/8FnvFlL

@Mengdi it’s going to be a big task to weed out the real stores from the made up ones and if Eufy products were really used.

I am hoping between now and by the time this contest is done that one of my cameras catches something. Besides my kid being scared by my neighbours dogs or the rabbit in the backyard, all seems to be day to day normal stuff.

Good Luck to all the participants.

How did you get an image to upload?

Their was one person who tried to rob us but the siren of the camera made the suspects get scared and they actually peed on them self’s and the camera got a very very clear view of the person .

I’ve had my Eufy cam system, Wired 2k doorbell, 2 Cam2C’s and 2 Cam2C Pro’s for a few months now. Never did I actually think I would capture a video of someone trying to get into my cars. However last week on a cold drizzly night sure enough at 1:40 am the system did as it was supposed to.

My neighbor was going on a 2 month vacation and asked for my help. I put my 2 pan/tilt cams in his house and left them on my app. 2 days after he left I got a notification. Someone walked up on his porch and looked thru the sliding glass doors. The cam picked them up thru the glass and sounded the camera alarm. That was all it took and they bugged out ASAP! Tiny little speaker saved the day!

Ok… not much action. But it’s all I got so far.

We love our indoor Eufy security camera. We have it angled to the front door. Earlier this year we had a complete stranger come to the front door and jiggle the knob to the front door. We were able to see their face through the window with our Eufy. Luckily, they left without trying to get in! Come to find out, it was a neighbor’s friend who was at the wrong house! He was very apologetic, but we were glad we had our Eufy!

All the stories are great!

We use 2 eufy Security Indoor Cam 2K as a baby monitor for our 2 children ( 1 month / 14 months) with the push notifications, it works great, we love it.
The movement tracking also works great, if the little one climbs out of his bed, you still have an eye on him.
What’s missing, however, is an eufy app for the Apple Watch and the possibility to play music via the cameras.

It’s been a crazy time with COVID and being locked down at home, but making it easier for essential workers like the Mailman or Delivery people, is one small way to try to make things easier for these front line workers.

Since winter is in full force here in Canada, it’s a small joy to be able to use Eufy to check to see if the Mailman has arrived yet; to beat him outside to shovel the snow in the morning; and then watch him be able to easily walk up to delivery the mail without having to wade through 2 feet of snow 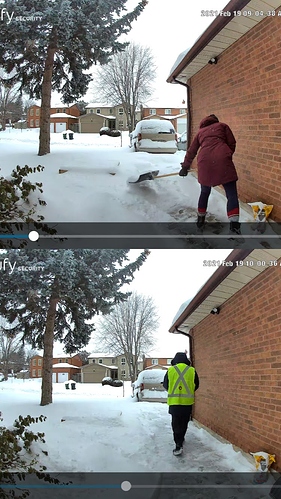 I just bought a indoor cam one week before my 6 1/2 months deployment started. Now i can see my family, see whats going on home and take care from many kilometers away. I’m happy with eufy and will install more eufy cameras Outdoor as soon as i am back home.

I bought my Eufy floodlight camera after my husband died in September and I was understandably nervous about living alone as a 34-year-old female. As a shiftworker at the hospital, I’m always coming and going at weird hours and wanted some piece of mind knowing that there weren’t any creepers lurking around, especially after I woke up one morning to a homeless man sleeping on my patio furniture (this was the tipping point for getting the system).

While I have been (very thankfully!) safe since then, I’ve had the unexpected pleasure of being introduced to the loveable neighborhood cat through the camera. He is very shy, but when I see the notification pop that he’s come by to see if I have any food, I’ll go give him a snack. I lost my 10-year-old cat in 2020 as well, so it’s been a silly comfort for me.

TL;DR - Came for the safety, stayed for the cat!

(Trying to add a still from the cam of him, but the post is resisting my efforts!)