9:48 Doorbell catches the guy downstairs walk out the front door and to his truck.

9:58 Doorbell catches the guy downstairs walk out the front door and to his truck.

9:59 Driveway cam catches the guy downstairs walk from the garbage cans beside the house to his truck.

Useless unreliable waste of time money and resources. I wish I had never purchased a single eufy product. 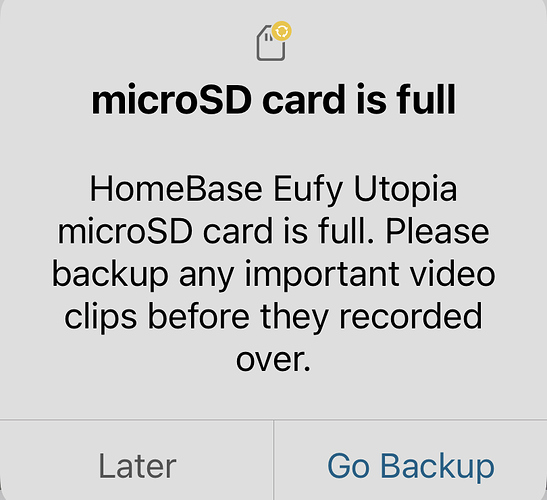 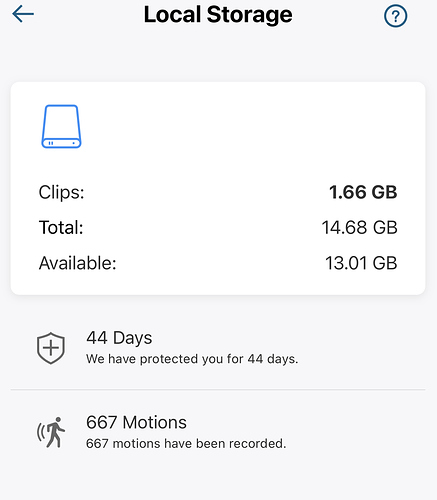 No idea as to why it’s doing this but my storage is damn near empty. Looks like the recent firmware just added to the bugs of

Yep have this as well. Also since the Homebase update automation when doorbell is press the 2c should record but don’t get ant link recording. Can’t believe they can fix any of these problems.

You have the wrong settings.
Increase sensitivity and limit your borders.
Works fine once set properly.
It has a better response if people are walking across rather than towards.
Needs to be at correct height 1.2-1.5 m ( latter works best for me). Higher doesn’t work as well.

First set the limits of your bell a little short of your boundary.
Set it to 10 to 15 seconds recording.
Set it to human only.

We had the very same issues as you have. We were patient. Adjusted the settings and now have a system that only picks up people, is within our boundary and our bell is in line with the driveway.

We first set it to moderate 3-4 sensitivity until we figured out the boundary. The moderate sensitivity meant it was a little late in picking up people just as you describe. Once boundary was set we adjusted the sensitivity to 5. That is after we had adjusted the height of the bell three times to pick up anybody entering our boundary. For us it is 1.5 we had it higher 1.7 and lower 1.2.

Yes it is frustrating but fix it in position. Leave it to work in real time. Then adjust accordingly.

It is now only picking humans, very very few odd false notifications and we too are on a busy road.

Well I have hb2 and there might be a difference between the bell of hb1 and hb2 as well as hb1 and hb2.

It doesn’t pick up traffic consistently on all motion. It’s not meant to, it’s a door bell.

It’s unfortunate it’s not working how you need it to work. For us after a week of setting it up and almost giving up like you, it is now working almost perfectly.

Once we fix it with a permanent power supply, it will have been a great worthwhile investment for us.

Yes motion should be all motion but it isn’t. For example it will not pick up trees and small bushes moving, and whilst it didn’t miss any busses it did miss cars depending on colour and speed. It easily picked out people beyond our boundary but like yours missed activity until close to the bell.

Once we changed to human limited the boundary adjusted the height and sensitivity all is fine. Maybe just luck, possibly the recent update helped.

We also have the dome indoor cam , tested it pointing out the window, again once set up it has been surprisingly very good (only tested for human/ pets). Seriously thinking about putting it outside, once there is a power line in place.

Sorry I can’t be of any help.

I have 2 wireless battery doorbells set up on my door right now for testing, directly above each other, the only difference in the detection angle is the height. One is hard wired, the other battery alone.

The detection settings are exactly the same on both, sensitivity, zones and all activity, 1 minute clip length, no end early option. I want to see cars on my drive before the people get out. I want to see who it is and be able to recognize their car.

80-85% of the time they pick up exactly the same movement, clips, human recognition, thumbnails etc. and do an excellent job, couldn’t be better. Good results.

Sometimes one will be triggered and the other one won’t. Happens both ways, sometimes it’s the black one, sometimes it’s the white one… When it’s a glint of sunshine or a passing car (which is not in the activity zone) I shrug and it doesn’t bother me, since that’s a thing, it happens. Sometimes the clip lengths vary in length, no big deal, often they match perfectly. I’d rather get false footage/notifications than no recording.

However, sometimes there’s a significant event (package delivery, Uber eats/door dash, kids coming home) and one will pick it up and have an awesome record of it, while the other one sat there and did nothing. Nothing.

That’s the incredible inconsistency that Is baffling. They act like peas in a pod most of the time, but not ALL of the time. They have the same specs, firmware, HB and location.

Bottom line, I can’t trust them. I don’t know if it’s because I expect too much of a ‘security device’ that’s only job is recording motion when it’s triggered to or that no doorbell can do it.

I have a ring pro waiting to be picked up at Best Buy right now and a ring 3 plus being delivered from Amazon today. I’ll be putting them up tonight and tomorrow to compare all 4 together, so we will see if I’m being unreasonable. The highest performer gets to stay.

I just took the picture below, the irony was that one noticed me stood right there, the other didn’t… 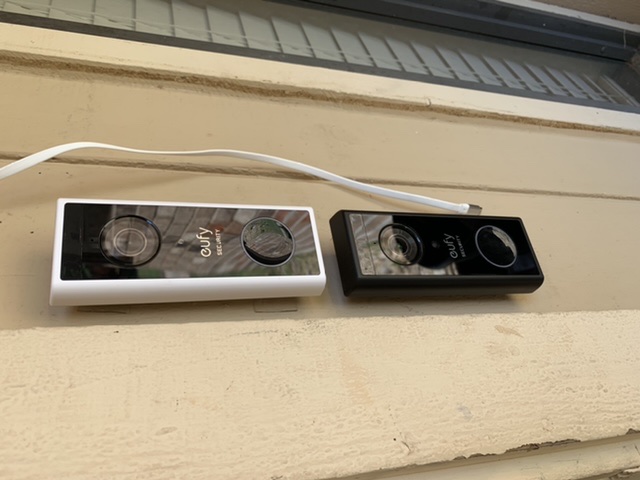 Same for me, once it gets set off it continues to see the motion (for me it’s the shadows of the trees on the drive). The clip runs until the end point I set and I pat it on the head and say good job boy, I’d rather have you alert and on the job than asleep at the wheel, just like my dog who growls when he hears the bin wagon when it rumbles through on Tuesday mornings. It’s acceptable behavior.

As long as he’s listening when the bad boys come round I don’t mind when he tells me there’s a garbage truck too. I can decide what I want to be concerned about, as long as he tells me…

The wired bell has a 3 second buffer, the battery one doesn’t, plus it needs to wake up that’s where the sensitivity settings become important.

It does not prove that activity zones do not work.
If your activity zone is further away from the camera, any senor gets more inaccurate. Therefore you have to set the sensitivity higher to pick up stuff from further away. Aside from that, the zone in which the camera detects activity is NOT the full camera view as you see it on your screen (this is documented).

Come on, sometimes I feel like people are just looking for things to be negative about

It would be nice if we had to actually look for things to be negative about.

Unfortunately there’s so much in our faces whenever we open the app.

Today a 2c isn’t picking up any motion at all, it’s been great for a week. Probably been broken all day yesterday, I had come to be lulled by it actually working and didn’t check on it.

My indoor cam is offline as of yesterday.

These are security items, shouldn’t be unreliable toys.

The only consistent things are the blatantly exaggerated claims, creation of new threads shilling the next product, deafening silence as to actual specs and solutions and the creation of problem threads here every day that go unanswered.

‘Have you contacted customer support?’ Is not an acceptable answer.

You are right, there should not be any doubt whether the devices are working. Just to be clear, cameras not detecting what’s inside an activity zone could be a distance issue, maybe tweaking settings is required (as I mentioned in my previous post). However, cameras not functioning at all is absurd and should not go unnoticed.

Do you have any eufycam 2’s? I have the feeling those produce less problems.

I don’t, I have 2x2c, two wireless doorbells and an indoor cam on an hb2, which won’t handle those 5 at a time. I have to disable one of the 2cs to be even able to test. I wanted the 2cs for the led light coming on, the idea being I would rather deter a casual would-be thief than have great evidence/footage of an actual one.

I have a spare/unused hb2 that came with one of the kits but I feel I shouldn’t have to use 2xhb2 for 5 cameras. When I bought into Eufy at the beginning of the month the fantasy was that a single hb2 would support 16 units, despite Eufy knowing long since that it couldn’t get anywhere near that. I only got to read the forums after I’d handed over my cash, like most people here.

I have 3 eufycam 2’s and one wired battery doorbell.
It seems to all work fine at this point. Have you tried the other homebase and see if that one can connect all the devices?

I wonder which products are better? Ring? Arlo? Google? I personally think they are all rubbish including Eufy.

Ive been looking at all the forums and they all have their issues. So far ive experienced a couple of problems but its been good with the Human recognision. Generally, i think its better than ring, i may change my mind if I experience more regular random issues.

Hopefully that will be ok and it wont blow the doorbell up. Hopefully.

Sorry you had a bad experience. 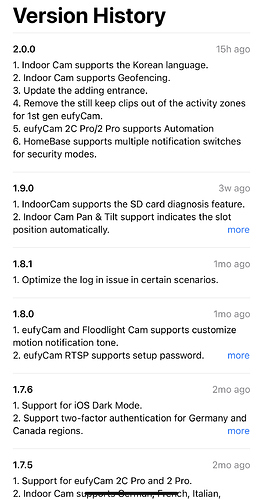 For what is there an update?